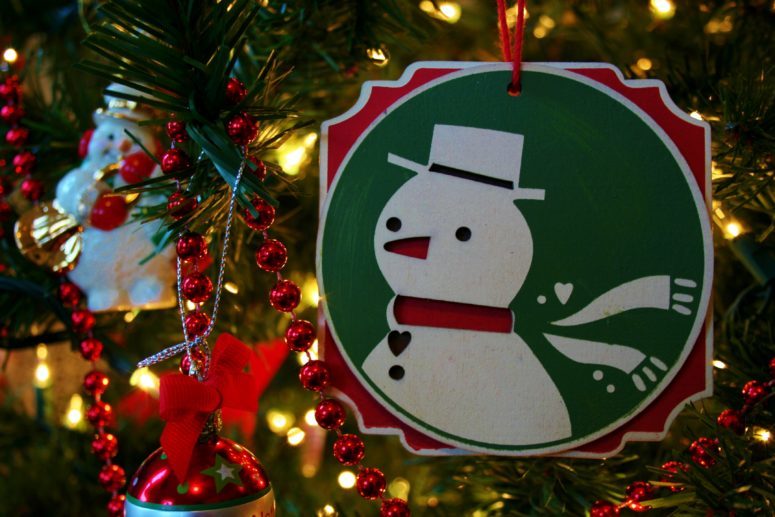 Today I took down the Christmas decorations.  With the help of the kids, this actually went pretty fast.  The main reason for this is that I limit the amount of decorations that we have.  Let’s face it: I’ve got a small house and don’t have much room for knick-knacks.  We put up a tree, a wreath on the door, stockings, a nativity scene, and dining table decor.  There are just a few other items that go on shelves and the kids each have something special that they put in their rooms.  This means I have an artificial tree box, a wreath box, and 3 bins with ornaments and other stuff.  That’s it.  So there is not a lot being stored in my basement, it takes us about 10 minutes to bring all the bins up or down, and we can decorate or undo in about 2 hours.  Win!  I realize that other people have different priorities (and house sizes!), so if you have more stuff or really love to decorate for Christmas, go for it.

For me, decorating is a source of stress.  I don’t feel like I excel at it, and frankly, it just doesn’t interest me that much (true confession).  Several years ago I got rid of all the items that I didn’t like or didn’t use by donating them to someone who needed decorations (she was so happy to get them!).  Every year I try to get rid of things that we don’t use.  Hey, if it didn’t come out of the box to be used, do I really need to keep it?  Storage space is precious!  This year I tossed a rather ugly homemade ornament made by a child 8 years ago (with her blessing—“Please, mom, get rid of it!”).  I also decided it was time to get rid of a garland that we all find irritating to put on the banister.  The stiff wire makes it tough to wrap around things, and it always seems to be bent the wrong way.  Maybe we’ll replace it with something we like better next year.  Or not.  I probably should have gotten rid of several small votive candle holders that I didn’t even get out, along with some Christmas books that my kids are too old for.  The books are a hard one for me because they are a bit sentimental.  Maybe I can save them for my future grandkids.  I think I spotted some ancient sticker pictures at the bottom of a bin.  My kids are definitely embarrassed by some of the “cute” stuff they made when they were little.  I think I can toss them…next year.  After all, I’ve already put the bins away, and I’d rather not get them out again.

One in, one out

Another key to minimizing the Christmas chaos for me is to limit the amount of new stuff I allow into the house.  This year I bought a new tablecloth because I got rid of the old one last year.  That seems reasonable to me.  I also made several ornaments at a crafting party with friends.  Now, I’m not normally a crafty person, so I think this small indulgence was worthwhile.  Five new ornaments to put in the box (I know, five!—go me).  I also bought some replacement bulbs for a bubble-light night-light we put in the bathroom.  Those are legitimate to store for future use.

This year I also had to buy new lights for the tree.  I bought one of the those pre-lit Christmas trees several years ago.  Last year the lights fritzed out on me.  Despite an incredible amount of time spent with one of those gadgets that lets you test lights on the string, I finally had to admit that the whole string was just bad.  Have you ever taken strings of lights off a pre-lit tree?  They put zip ties around every. single. light.  It took forever to cut all of the zip ties and get the lights off the tree.  That was last year’s end-of-the-season project.  This year I made 3 (count ‘em: 3!) separate trips to the store for strings of lights (on the same afternoon).  I seriously had no idea that there were so many lights on a tree.  I put 900 lights on the tree.  Who knew?  I did strategically string the lights so that each of the 3 sections of the tree were separate, so now I can leave all the lights on the tree for next year.  Genius!  No more light stringing.  And if one of them burns out again,  I’m just taking the one string off to replace.  And no, I did NOT use zip ties!

So that wraps up another year of Christmas decorations.  Oh, speaking of wrapping, I forgot about the bin of gift bags that is still in the hallway.  Yes, I did go through the bin this year (after just cramming things in any-which-way last year).  I tossed the ripped bags and sorted them.  I use one bag of each size to put the rest of the same-sized bags in folded up.  Then there are some gift boxes that fold flat, a box that has used tissue paper in it, and a few bows (we aren’t really bow-people around here).  I also bought a new bin at Target to store wrapping paper in this year.  It is smaller, and stands upright, which is more useful to me for basement storage.  Well, I’ll just go take that down to the basement and call it done.