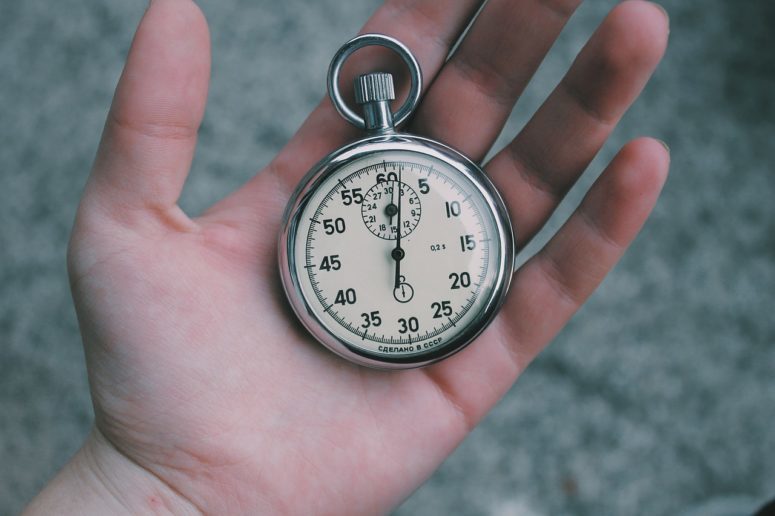 This is the third post in a series on Procrastination.  The first remedy was how to stop procrastinating because the job is too boring.  This post has solutions for procrastination because you feel overwhelmed by how long things take.

Sometimes you feel overwhelmed because you think it will take f-o-r-e-v-e-r to do something.  I get it: I whine (to myself) about this, too.  The thing is, most of us are pretty bad at estimating time.

One thing that can help improve your sense of how long tasks really take is to keep track.  Really.  Make yourself a little two-column chart where you list the tasks you do (or you can print out this sheet: How Long is This Going to Take).

Make an estimate of how long you think it will take to do the job in one column, then time yourself and write down how long it actually takes in the other column.

Sometimes knowing that it really only takes you 3 minutes to vacuum the living room instead of 15 minutes can get you to take action.  You can tell yourself, “Come on, it’s only going to take 3 minutes to do this.”  And you’ll be right.

Keeping track of how long tasks typically take can help you become more realistic about time.  You’ll be able to be more productive because you can plan better when you know how long things take.

This also gives you data for planning a household system that actually works for you.  More on that in another post.

There are tons of “little” tasks that we tend to put off because they take some time.  But usually not very much time.  In fact, many things take two minutes or less.

So, if you can train yourself to do things that take less than two minutes immediately, you keep things from piling up into an overwhelming amount. I know you can’t always do things immediately, but most of the time you can.

I’ve seen this in my own home.  The counter is freshly cleaned off, all the dishes washed and put away—it looks great.  But an hour later, I think, “I’ll just set this coffee cup here—I’ll put it in the dishwasher later.”

Then someone else (not me, of course) comes along and sees the cup on the counter, and adds a plate.  Soon another plate and a fork show up.  Then a few more cups, and before you know it, there is a big pile of dishes on the counter that needs to be put in the dishwasher.

Now it’s going to take some real effort to put the dishes into the dishwasher. And feels like it will take forever!  It’s even more tempting at this point to put it off because of how long it will take.  Trust me: if it takes less than two minutes to do, just get it over with.

Some projects really will take a long time.  That basement didn’t become a storage warehouse overnight, and it’s going to take many hours to go through everything on a decluttering mission.

You know it’s going to take a long time, so how can you convince yourself to tackle the monster instead of quietly shutting the door and walking away?  Set a timer, my friend.

Set the timer for a short amount of time.  Pick an amount of time that you know you can work for (but not so short that you can barely get started).  I recommend 15 minutes.

You know you can do something for 15 minutes no matter how hard it is or how much you hate it.  If you really focus for just 15 minutes, you can get quite a lot done, especially if you have some kind of plan.

Take the basement for example: in 15 minutes, what could you realistically do that would make an actual difference?  Could you put one load of laundry in the washing machine and fold one load from the dryer?  Of course, you could!  Would this be actual progress?  YES!

The power of 15 minutes

Maybe your laundry isn’t in the basement like mine (lucky you!).  So could you sort one box in 15 minutes?  Probably (depends on what’s in there).  If it is a dense box (i.e. full of many little things or papers) or if it is a sentimental box, it might take you several 15-minute sessions to go through.

But what about that box of clothes that is too small for anyone in your house?  Could you decide to donate that, tape it up, and put it in your car in 15 minutes?  YES!  Would it make a difference?  Absolutely!  One box, gone from the basement forever!

At the end of a 15-minute session, take 5.  Get a drink of water, go to the bathroom, shake it out.  Then you can congratulate yourself on a job well done, or you can go for another 15-minute session.

A series of 15-minute sessions can put a serious dent in the pile.  It can take your living room from trashed out to on the road to recovery.  It can get your bathroom or kitchen tidied up.

Seeing how much you can actually do in a small amount of time can get you motivated to keep going.  Next up: Remedies: where do I start?