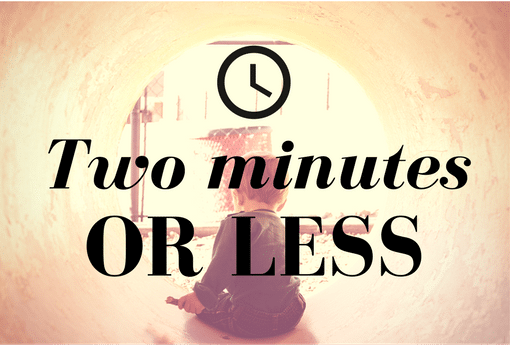 In a previous post about demolishing piles, I ended at the point of me starting to complete items in my “Take Action” box that take two minutes or less.

Why that length of time?

David Allen says in his book Getting Things Done, “The rationale for the two-minute rule is that that’s more or less the point where it starts taking longer to store and track an item than to deal with it the first time it’s in your hands—in other words, it’s the efficiency cutoff.”

Get it? The efficiency cutoff means that it’s going to take longer to shuffle this item around or list it on your to-do list than it takes to do it.  If this item deserves to be done at all, it should be done immediately as you process the box.

I am often amazed at what can be done in two minutes (or less).  My house is not that big, so even if I had to travel the maximum distance (3 flights of stairs) to put something away, I could totally do it in two minutes!  (Of course, I might be limited in the number of trips I could make in quick succession.)

One of my maxims is “Don’t put it down, put it away.”  Here are some things I am often tempted to put down instead of away:

You get the idea.

Besides putting things away, there are quite a few short cleaning tasks that I can do in two minutes or less:

Here are some more things you can do:

The point is, there are a ton of things that don’t actually take that long to do.  Instead of thinking, “I’ll do it later,” do it now.  So often I just set things down or put things off because I don’t feel like it.  Well, too bad!  Who’s the grown-up here?  I can force myself to do things anyway.

The problem with putting things down is that it means you have started a pile.  And piles have a way of growing.  Pretty soon, somebody (probably you) sets something else down there.  And then it seems okay to park things there.  Before you know it, you’ve got a big, messy pile that will take some real time to deal with.

Can you see how this will probably seem too hard (and it will definitely take too long)? So, you’ll make excuses not to deal with it.

Don’t let it start!  Just deal with it right away.

Two minutes or less.  You can do it!