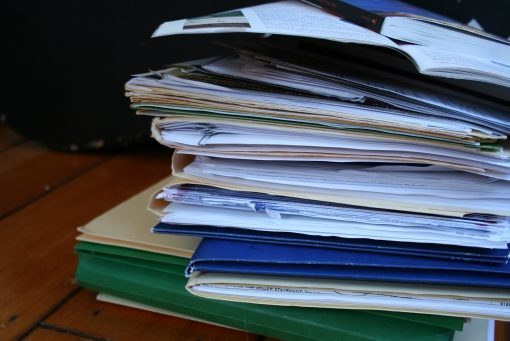 My mother is one of those people who is just naturally neat. Even my two brothers are neat, organized people. Our house was always tidy and clean, with one glaring exception: my bedroom. Somehow I missed out on the “neat gene.” My room was always chaotic and overstuffed. Oh, I had my neatness attacks and cleaned up every so often, but it wasn’t sustainable. Before long my room would devolve into chaos again.

The piles moved around; they were fruitful and multiplied

When I grew up, I didn’t magically become an orderly person. The piles just grew, and I added to them because now I had an income to buy my own stuff with. Then I got married and inherited a whole lot more stuff from my husband. Then we had kids and the piles EXPLODED with baby gear and toys. When I started homeschooling, it began to dawn on me that my house has finite storage capacity: it would not be possible to save everything.

Eight years ago, I was desperate and created a 90-day decluttering challenge for myself. On a former blog, I even wrote about my efforts to downsize the out-of-control piles (You can read this series in The Declutter Diaries, reproduced on this blog with commentary from my present-day self). It was my first serious effort to deal with the disorder. I made some good headway but never made it through all the stuff.

Four years later I was forced to take more massive decluttering action due to a major renovation in our house. Again, I made good headway, but the piles remained. Since that time, I have sporadically made more efforts to organize and get rid of stuff. But the biggest problem always seems to come back to not having any systems in place to deal with stuff. And so I keep piling.

10 years ago I started writing annual State-of-the-Mama reports to myself. On every single one there is something about clutter, chaos, too much stuff, disorganization, piles, and so forth. 10 years! I was born a piler, but I don’t want to die one. I’d like to think that somehow there is a way out of the endless piling. That is the “why” for this blog. I want to find the way out of disorder and chaos. And when I do, I want to show that pathway to others.